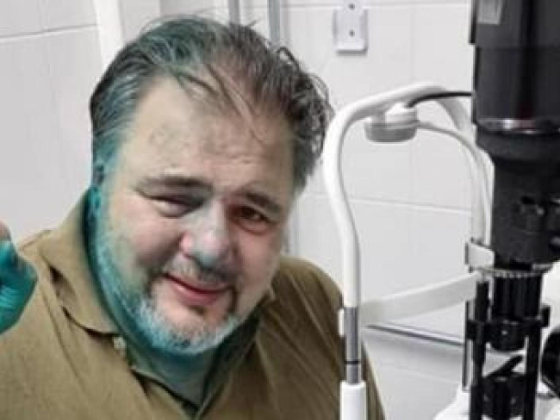 In their statement, the UPM said "We call on the police to investigate the vile and savage act of political violence of right-wing radicals openly bragging about their crime in social networks." The UPM has also reminded of a previous attack against Kotsaba that took place on January 22, before his trial: "Also, we are shocked by impunity of the scoundrels who attacked Kotsaba, his mother and lawyer near the Kolomyia City District Court on January 22; these attackers should be taken accountable too."

WRI strongly condemns these brutal attacks against Ruslan Kotsaba and stands in solidarity with him. We also join the UPM in their call to the authorities to investigate this and previous attacks against him thoroughly and take necessary steps to ensure Kotsaba's and other UPM activists' safety.

Meanwhile, Ruslan Kotsaba will be on trial again today (29th June). Kotsaba is tried for a video he posted in 2015 in which he was calling to boycott military mobilisation for the conflict in Eastern Ukraine. He is being accused of treason and obstructing military operations for his expressions calling for peace and faces a prison sentence of 5 to 15 years.

You can support Ruslan Kotsaba by filling our email alert, writing to the Prosecutor General of Ukraine demanding an end to his prosecution. You can use our template letter, both in Ukrainian and English, here. Scroll down for its English translation when you click the link.

He already had spent 524 days under arrest for his expressions opposing the war and was duly acquitted in 2016. Kotsaba's retrial is a clearly politically motivated persecution which must end immediately.

For background and more information on Ruslan's case, see here.